Anandaroop Ray (“Anand”) started his career as a non-seismic geophysicist with Shell Exploration and Production in 2007. In 2010 he joined the PhD programme in marine electromagnetics at the Scripps Institution of Oceanography in San Diego, California. In 2014 he completed his thesis focusing on uncertainty estimation in electromagnetic inversion for marine natural resource exploration.

From 2012-19, he worked at Chevron R&D on various problems – controlled source electromagnetics (CSEM), seismic full waveform inversion (FWI), reservoir properties from seismic (RPFS), airborne electromagnetics (AEM), statistical exploration lookback analyses, and the role of machine learning in geophysics. The question most asked through his work is “how credibly can we interpret our inversion model(s),” the answering of which often requires the use of high performance computing (HPC) techniques.

He has been a PhD thesis co-advisor at Columbia University on Bayesian geophysical inversion, and has been active in convening and organizing the Uncertainty in Geophysical Inversion session at the American Geophysical Union’s Fall Meeting. In March 2019 he joined the Minerals, Energy and Groundwater Division at Geoscience Australia (GA). His work at GA focuses on inverse uncertainty, model representation, geostatistics as well as open source numerical software development. 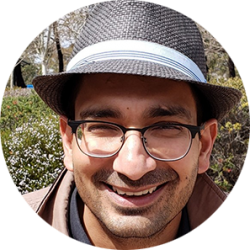